Why We Do What We Do

Why I do this work 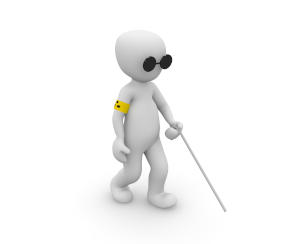 While working as a Director at another company, I noticed a gentleman walking up the front ramp into the building using a white cane. He didn’t come back out, so I realized he also worked there.

After my meeting was over, I went looking for the blind man working at an Internet Service Provider.

I found him in Customer Support. I had to know how he went about talking to customers on the phone about their connectivity issues. I asked him how he used the internet and the tools we provided to our employees to better help our customers.

He sat me down, put headphones on my head and told me to close my eyes. He moused around the screen to let me hear all the words and pictures that sighted folk see. It was overwhelming, but made perfect sense, and now I “saw” the interface differently.

A year later, I was in Florida visiting my grandmother. One of her neighbors asked if I could fix his computer. He showed me his screen which he had set up to only show black text on a white background, VERY large text because he had macular degeneration. He had difficulty seeing any other way.

The problem was that a website he was trying to use had locked down the styles to match a particular design, so he couldn’t enlarge the font size and see what the website was displaying.

Soon after, I learned that only 10 percent of designers and web developers actually understand how to build websites and digital media for everyone by following the the ADA standards drawnup by the Word Wide Web Consortium.

I truly believe every individual should have equal access to all of the information we are trying to provide to them on the internet.